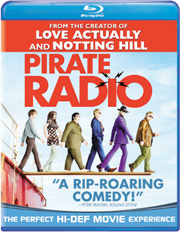 Universal Home Entertainment has added Pirate Radio to their release schedule, bringing the film to DVD and Blu-Ray Disc in April.

From the creator of “Love Actually” and “Notting Hill” comes a trip back to the freewheeling, free-loving ’60s when the very rock music that inspired a generation was censored by the government. When a group of rebellious deejays decides to defy the ban, they take to the seas to broadcast music and mayhem to millions of adoring fans. Featuring a soundtrack that includes The Who, The Kinks, Jimi Hendrix, David Bowie, The Rolling Stones and many more, it’s a feel-great film based on a true story.

The DVD version arrives in widescreen with a Dolby Digital 5.1 audio track. The only extra on the release will be a Feature Commentary with Director Richard Curtis, Producer Hilary Bevan Jones, and Actors Nick Frost and Chris O’Dowd.

The Blu-Ray version arrives in 1080p high definition with a DTS 5.1 HD Master Audio track and will include the same Feature Commentary with Director Richard Curtis, Producer Hilary Bevan Jones, and Actors Nick Frost and Chris O’Dowd. In addition, this version will also contain a number of Featurettes on the making of the film, as well as Universal’s myScenes feature.