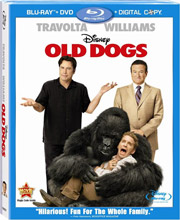 Buena Vista Home Entertainment has added the comedy Old Dogs to their release-lineup, bringing the film to DVD and Blu-Ray Disc in March.

Dan (Robin Williams) and his best friend and business partner Charlie (John Travolta) are on the verge of the biggest deal in the history of their sports marketing firm when their lives are turned upside down by a surprise visit from Dan’s ex-wife Vicki (Kelly Preston). Vicki has big news for Dan—their ever-so-brief liaison produced twins Zach (Conner Rayburn) and Emily (Ella Bleu Travolta), now seven-years-old and in need of a dad to keep an eye on them for two weeks. With only high-living playboy Charlie for support, Dan’s bumbling attempts at “on the job training” in fatherhood result in a series of disastrously funny exploits that lead him to a new understanding of what really matters in life.

The DVD version will contain a selection of Deleted Scenes and Bloopers, as well as a Commentary Track with director Walt Becker, producer Andrew Panay, and writers David Diamond and David Weissman.

Also, a 3-disc Blu-Ray/DVD Combo will be available for this movie, containing all of the above features, as well as the Bryan Adams Music Video “You’ve Been A Friend To Me“ and the Featurette “Young Dogs Learn Old Tricks”, as well as a Digital Copy of the film.