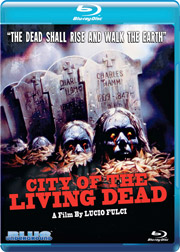 Blue Underground has just added a new version of Lucio Fulci’s zombie epic City of the Living Dead to their release schedule, bringing the shocker to DVD and Blu-Ray Disc in May.

The Seven Gates Of Hell have been torn open, and in three days the dead shall rise and walk the earth. As a reporter (Christopher George) and a psychic (Catriona MacColl) race to close the portals of the damned, they encounter a seething nightmare of unspeakable evil. The city is alive – with the horrors of the living dead!

Directed and co-written by the legendary Lucio Fulci, “City of the Living Dead” features some of the maestro’s most shocking and controversial sequences of all time.

The Blu-Ray version will be even more exciting, offering a 1080p high definition transfer of the film, complemented by a DTS 7.1 HD Master Audio track. The release also includes all the bonus materials from the DVD version but will, in addition, also come with Acting Among the Living Dead, an interview with Star Catriona MacColl, Entering the Gates of Hell, an interview with Star Giovanni Lombardo Radice, and the featurette Memories of the Maestro in which the cast and crew reminisce about working with Lucio Fulci. The release will be rounded out by the Marketing of the Living Dead – Poster & Still Gallery.