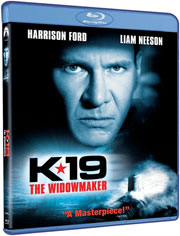 Paramount Home Entertainment has finally re-scheduled Kathryn Bigelow’s 2002 thriller K-19: The Widowmaker for release on Blu-Ray after pulling it from schedules last summer.

At the height of the 1960’s Cold War, Russia launches its flagship nuclear submarine, the K-19. In command is iron willed Captain Alexei Vostrikov (Harrison Ford). Also aboard is the popular executive officer Mikhail Polenin (Liam Neeson), who clashes with Vostrikov but shares his unwavering patriotism. As the K-19 heads toward American waters, a shocking discovery is made: the vessel’s nuclear reactor system is leaking, imperiling the men and the sub’s missiles. With time running out, the fearless Vostrikov and his crew join together as brave countrymen who must decide the true meaning of duty, honor and sacrifice.

The release will feature a 1080p high definition transfer complemented by a Dolby Digital 5.1 TrueHD audio track. As extras the release comes with a Commentary Track by director Kathryn Bigelow and cinematographer Jeff Cronenweth. Also included are a series of Featurettes, such as ”The Making of K-19: The Widowmaker,” “Exploring the Craft: Make-Up Techniques,” “Breaching The Hull” and ”It’s In The Details”. The release will also includes the movie’s Theatrical Trailer.