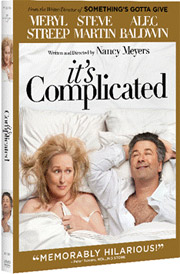 Universal Home Entertainment has added the comedy It’s Complicated to their release schedule, bringing the film to DVD and Blu-Ray Disc in April.

Two-time Academy Award® winner Meryl Streep, Steve Martin and Alec Baldwin star in this hilarious look at marriage, divorce and everything in between.  Jane (Streep) has three grown kids, a thriving Santa Barbara bakery and is on surprisingly amicable terms with her ex-husband Jake (Baldwin).  Finally, a decade after her divorce, life’s options seem endless—until a few bottles of wine with Jake turns their cordial relationship into an impulsive affair. Caught in the middle of their rekindled romance is Jake’s young wife and Adam (Martin), a recently divorced architect who’s fallen hard for Jane.  Could love be sweeter the second time around?  It’s… complicated!

The DVD version features an anamorphic widescreen transfer with Dolby Digital 5.1 audio, while the Blu-Ray version will dish out a 1080p high definition transfer, supplemented by a DTS 5.1 HD Master Audio track.

Both versions will include a Commentary Track with writer, director and producer Nancy Meyers, executive producer Suzanne McNeill Farwell, director of photography John Toll and editor Joseph Hutshing, and a Making-Of Featurette that takes you behind the scenes of the production.