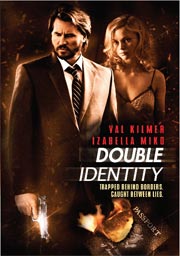 First Look Studios is releasing Double Identity on DVD this week, a film in which a case of mistaken identity spins completely out of control.

Dr. Nicholas Pinter (Val Kilmer) is an American physician working for Doctors Beyond Borders in developing Bulgaria when he is mistakenly identified as a secret agent. After a violent pursuit by two mobsters, he escapes a close brush with death when he is rescued by the British Secret Service and the beautiful but mysterious Katrine (Izabella Miko).  Nicholas soon realizes that the deadly game has only begun as he and Katrine become tangled in a deadly web of lies and murder.

Featuring an anamorphic widescreen transfer, the movie comes with a Dolby Digital 5.1 audio track but will not contain any bonus materials.