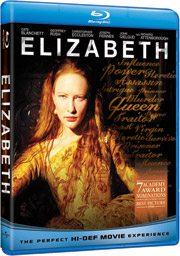 Universal Home Entertainment had release Elizabeth and Elizabeth: The Golden Age on HD-DVD a few years ago, but it is finally time for the studio to bring both films to Blu-Ray Disc also.

Before the Golden Age, Elizabeth was a passionate and naive girl who came o reign over a land divided by bloody turmoil. Amid palace intrigue and attempted assassinations, the young queen is forced to become a cunning strategist while weighing the counsel of her mysterious advisors, thwarting her devious rivals, and denying her own desires for the good of the country.

Relive the majesty and drama of one of history’s greatest monarchs in this stunning production that was honored with 7 Academy Award nominations including Best Picture!

The release will feature a 1080p high definition transfer with DTS 5.1 HD Master Audio tracks in English and DTS 5.1 tracks in a large variety of additional languages. The release will contain the same bonus materials that were found on the previsouly released HD-DVD version, such as a Commentary Track by Director Shekhar Kapur, a Making Of Featurette and the Historical Featurette ”Elizabeth”. BD Live features will round out the release.

When Queen Elizabeth’s reign is threatened by ruthless familial betrayal and Spain’s invading army, she and her shrewd advisor must act to safeguard the lives of her people. But when a dashing seafarer, Walter Raleigh, captures her heart, she is forced to make her most tragic sacrifice for the good of her country.

“Elizabeth: The Golden Age” tells the thrilling tale of one woman’s crusade to control her love, destroy her enemies and secure her position as a beloved icon of the western world.

The release arrives in 1080p high definition with DTS 5.1 HD Master Audio also. The release contains a Commentary Track with Director Shekhar Kapur as well as the Making Of Featurette ”The Reign Continues” and a look
Inside Elizabeth’s World. Further included are Commanding the Winds: Creating the Armada and Towers, Courts, and Cathedrals
The release will also offer BD Live features to complete the presentation.