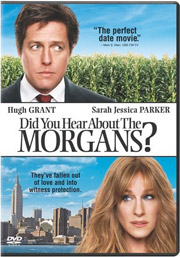 Sony Pictures Home Entertainment is bringing Did You Hear About The Morgans? to DVD and Blu-Ray Disc in March.

Hugh Grant and Sara Jessica Parker star in this delightful comedy about finding love in the most unexpected places. Two successful New Yorkers, Paul (Grant) and Meryl (Parker), are at their wits’ end with repairing their strained marriage. But when they become the only witnesses to a brutal murder, the police hide them away in Wyoming – together. Now these die-hard city dwellers will have to survive the weather, bears, fresh air, and forced time with one another if they want to make it out alive.

The DVD version features an anamorphic widescreen transfer of the film with Dolby Digital 5.1 audio and will also contain a Commentary Track with Director Marc Lawrence and Stars Hugh Grant and Sarah Jessica Parker. Also included on the release are the Featurettes ”Location, Location, Location!,” “Cowboys and Cosmopolitans: The Stars of Did You Hear About the Morgans,” “Park Avenue Meets the Prairie: The Fashions of Did You Hear About the Morgans” and ”A Bear of a Scene”. Deleted Scenes and Outtakes will round out the release.

The Blu-Ray version offers a 1080p high definition transfer of the comedy, supplemented by a DTS 5.1 HD Master Audio track. The same extras will be included on this release as on the DVD version but in addition you will also find Sony’s movieIQ Trivia Track and BD Live feature.