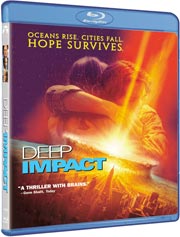 Paramount Home Entertainment is sending the end-of-the-world movie Deep Impact into the race once again, bringing the film to DVD and Blu-Ray Disc in May.

What would you do if you knew that in a handful of days an enormous comet would collide with Earth and all humanity could be annihilated? The countdown to doomsday is underway in this “gut-wrenching, eye-opening blast of a movie experience” (Jeff Craig, Sixty Second Preview). Mimi Leder (The Peacemaker) directs, guiding an all-star cast featuring Robert Duvall, Tea Leoni, Elijah Wood, Vanessa Redgrave, Maximilian Schell and Morgan Freeman. With the film’s dynamic fusion of large-scale excitement and touching, human-scale storylines, Deep Impact makes its impact felt in a big and unforgettable way.

The Collector’s Edition DVD will feature an anamorphic widescreen transfer with Dolby Digital 5.1 audio and will also contain a Commentary Track with Director Mimi Leder and Visual Effects Supervisor Scott Farrar. Further the release includes a series of Featurettes, suc has ”Preparing For The End,” “Making An Impact,” “Creating the Perfect Traffic Jam” and ”Parting Thoughts”. Also included on the release are a Photo Gallery and various Trailers.

On Blu-Ray Disc you will be treated to a 1080p high definition transfer with an Dolby Digital 5.1 TrueHD audio track. The extras on the release will be identical to those found on the DVD version.