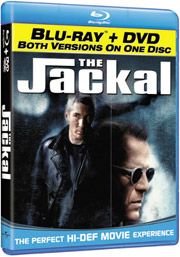 Universal Home Entertainment has added the Bruce Willis thriller The Jackal to their release line-up, scheduling the film for release as a Blu-Ray Disc/DVD combo in April.

A ruthless assassin has been hired to eliminate someone at the very top of the U.S. government. Constantly changing his identity and location, he is known only as the Jackal. Everything about this hit man, including his sinister timetable, is a secret.

Aware of the Jackal’s presence but uncertain of his purpose, the FBI’s Deputy Director faces the biggest challenge of his career. In order to track down this cold-blooded killer, he and a by-the-book Russian intelligence officer enlist the aid of an imprisoned Irish terrorist. These unlikely allies enter a global race against the clock to stop the mysterious mercenary before he can complete his deadly assignment.