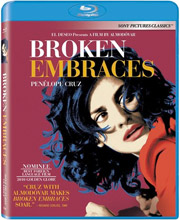 “Broken Embraces” is Academy Award® -winning filmmaker (2003, Best Writing, Original Screenplay, Talk to Her) Pedro Almodóvar’s acclaimed tale of sex, secrets and cinema. When her father becomes gravely ill, beautiful Lena (Cruz) consents to a relationship with her boss Ernesto (José Luis Gómez), a very wealthy, much-older man who pays for her father’s hospitalization and provides her a lavish lifestyle. But Lena’s dream is to act and soon she falls for the director of her first film – a project bankrolled by her husband to keep her near. Upon his discovery of the affair, Ernesto stops at nothing to ruin Lena’s happiness.

The DVD version features an anamorphic widescreen transfer of the film with its original French audio track. As extras you will find Deleted Scenes on the disc, as well as the