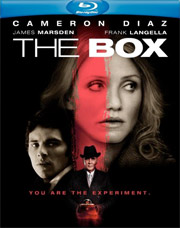 Warner Home Video is preparing the suspense thriller The Box for release in February, bringing it to DVD and Blu-Ray Disc

Push a red button on a little black box, get a million bucks cash. Just like that, all of Norma (Cameron Diaz) and Arthur Lewis’s (James Marsden) financial problems will be over. But there’s a catch, according to the strange visitor (Frank Lagella) who placed the box on the couple’s doorstep. Someone, somewhere – someone they don’t know – will die. Cameron Diaz and James Marsden play a couple confronted by agonizing temptation yet unaware they’re already part of an orchestrated an – for them and us – mind-blowing chain of events.

The DVD version of the movie will feature an anamorphic widescreen transfer, complemented by a Dolby Digital 5.1 audio track. As extras the release will include the Interview Featurette ”Richard Matheson: In His Own Words”.

The Blu-Ray version will comes as a 3-disc release, containing not only the high definition version but also the DVD version and a Digital Copy of the movie. As extras this version will contain a Commentary Track by director Richard Kelly. Also included is The Box Grounded in Reality and Visual Effects Revealed.

Further you will find Music Video Prequels on the disc, and, of course, the Interview Featurette ”Richard Matheson: In His Own Words”.