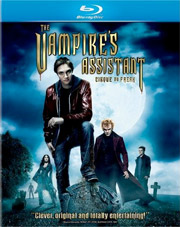 Universal Home Entertainment has just added the film Cirque du Freak: The Vampire’s Assistant to their release line-up, scheudling the release on DVD and Blu-Ray Disc for late February.

Welcome to the Cirque Du Freak, a traveling sideshow filled with magical creatures, misunderstood freaks, and the mysterious vampire, Larten Crepsley (John C. Reilly). Drawn to the dark, unpredictable world of the Cirque, 16-year-old Darren (Chris Massoglia) decides to trade in his ordinary life for a chance to become an immortal vampire. As Darren explores his newfound powers and faces unexpected enemies, he’ll find that his existence as a member of the undead is filled with more challenges, suspense and fun than he ever thought possible.

The DVD version will feature an anamorphic widescreen transfer of the film with Dolby Digital 5.1 audio. As bonus materials, the release will contain a Guide to Becoming a Vampire and Tour du Freak.

The Blu-Ray version offers up a 1080p high definition transfer with DTS 5.1 HD Master Audio. The release will contain the same bonus materials as the DVD version, namely the Guide to Becoming a Vampire and Tour du Freak.