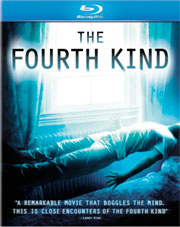 Universal Home Entertainment has added the thriller The Fourth Kind to their release schedule, bringing the film to DVD and Blu-Ray Disc in March.

In remote Alaska, citizens have been mysteriously vanishing since the 1960s. Despite multiple FBI investigations, the truth behind the phenomena had never been discovered — until now. While videotaping therapy sessions with traumatized patients, psychologist Dr. Abigail Tyler (Milla Jovovich) unwittingly exposes terrifying revelations of multiple victims whose claims of being visited by alien figures all share disturbingly identical details. Based on actual case studies, “The Fourth Kind” uses Dr. Tyler’s never-before-seen archival footage alongside dramatic reenactments to present the most disturbing evidence of alien abduction ever documented in this provocative thriller critics are calling “terrifyingly real… The most shocking alien abduction movie to date.”

The DVD version arrives in anamorphic widescreen with Dolby Digital audio in a variety of languages. Interestingly, no bonus materials have been announced yet.