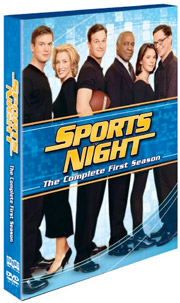 Set primarily in the New York City studios, Sport Night is a uniquely behind-the-scene look at a cable sports news show of the same name that focuses on the professional and personal lives of the people who push and pull and do everything they can to make that evening’s show go on the air.  It’s not always that easy.  Josh Charles as Dan Raydell and Peter Krause as Casey McCall, two “Sports Night” anchormen in their early thirties lucky enough to have turned their lifelong passion – sports – into lucrative careers, Felicity Huffman as the quick witted, ball-busting producer Dana Whitaker, whose passion for sports is match-for-match as passionate as Dan and Casey’s, Robert Guillaume as the cable show’s executive producer, Sabrina Lloyd as a young twenty something associate producer and Joshua Malina as a brilliant, though somewhat nerdish associate producer Jeremy Goodwin.

The 4-disc DVD set will include Commentary Tracks with the show’s creators, and cast and crew members. Also included is a Gag Reel and the Interview Featurette ”The Show”, in which creator Aaron Sorkin, director Thomas Schlamme and members of the cast and crew reveal the story of “Sports Night” from inception to cancellation to legacy.