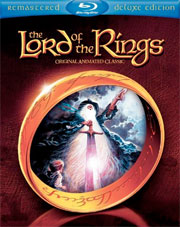 Warner Home Video has just added a high definition version of Ralph Bakshi’s 1978 animated treatment of The Lord of the Rings to their line-up, scheduling the film for release in April. A new DVD version is also being released.

Controversial animator Ralph Bakshi’s literal adaptation of J.R.R. Tolkien’s classic fantasy trilogy, “The Lord of the Rings,” is brought to the screen. An evil sorcerer from a previous era created a magical ring which enables its users to call upon its tremendous powers to rule the world, but it inevitably warps them to evil. It was believed lost, but during a resurgence of magical evil in the world, Bilbo, a simple, plain-spoken hobbit, recovers it from its hiding place. The forces of good give his nephew Frodo the choice to bear the awful burden of the ring to a place where it may be destroyed.

Arriving on both DVD and Blu-Ray Disc, this new version comes from a re-mastered print of the film for the best possible image quality. The 30-minute Interview Featurette ”Forging Through The Darkness: The Ralph Bakshi Vision for The
Lord of the Rings” will also be included on the release as the only extra.