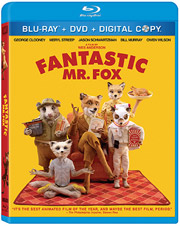 Based on the beloved best-selling book by Roald Dahl, “Fantastic Mr. Fox” tells the story of Mr. and Mrs. Fox (George Clooney and Meryl Streep) who live a happy home life with their eccentric son Ash (Jason Schwartzman) and visiting nephew Kristopherson. That is until Mr. Fox slips into his sneaky, old ways and plots the greatest heist the animal world has ever seen. When mean old farmers Boggis, Bunce and Bean join forces to surround Mr. Fox and his family, they don’t realize they are not dealing with any old fox – it’s Fantastic Mr. Fox and he has a fantastic master plan to save the day!

The DVD version will include the film in anamorphic widescreen, as well as the Featurettes From script to screen, Still Life: Puppet Animation and A Beginner’s Guide to Whack-Bat.