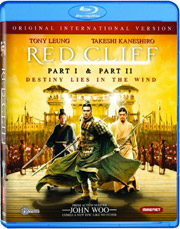 “Red Cliff, ” the epic historical drama based on a legendary 208 A.D. battle that heralded the end of the Han Dynasty. A power hungry Prime Minister-turned-General Cao Cao (Zhang Fengyi) seeks permission from the Han dynasty Emperor to organize a southward-bound mission designed to crush the two troublesome warlords who stand in his way, Liu Bei (You Yong) and Sun Quan (Chang Chen). As the expedition gets underway, Cao Cao’s troops rain destruction on Liu Bei’s army, forcing him into retreat. Liu Bei’s military strategist Zhuge Liang (Takeshi Kaneshiro) knows that the rebels’ only hope for survival is to form an alliance with rival warlord Sun Quan, and reaches out to Sun Quan’s trusted advisor, war hero Zhou Yu (Tony Leung). Vastly outnumbered by Cao Cao’s brutal, fast-approaching army, the warlords band together to mount a heroic campaign – unrivaled in history – that changes the face of China forever.

Magnolia will release film in two different versions in each format, sold separately. First there is the movie’s Theatrical Cut that will arrive on DVD and Blu-Ray Disc a single disc, including a Making-of Featurette, an Interview with John Woo, Storyboards and the HDNet Featurette ”A Look at Red Cliff”.