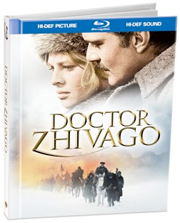 Doctor Zhivago will be making his Blu-ray premiere as a Digibook from Warner home Video, and new details have arrived on the extras.

David Lean demonstrates again why he’s a peerless filmmaker of substance and scale, directing Boris Pasternak’s tumultuous tale of Russia divided by war and hearts torn by love. Epic images abound: revolution in the streets, an infantry charge into No Man’s Land, the train ride to the Urals, an icebound dacha. Golden Globe Best Actor Award winner Omar Sharif plays the title role, in love with Lara (Julie Christie, the National board of Review’s Best Actress choice) and caught up in the tidal wave of history. Hauntingly scored by Maurice Jarre (who earned one of the film’s five Academy Awards) and full of indelible performances, Doctor Zhivago (American Film Institute Top – 100 American Films selection) is a moviemaking wonder.