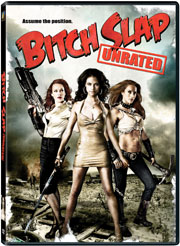 20th Century Fox Home Entertainment has added an unrated version of Bitch Slap to their release line-up, marking the release down for March.

Unlike any “B” movie ever seen! Assume the position and prepare to get slapped as bodacious bad girls, fervent brawls and slow-motion cat fights explode in the adrenaline-fueled, deliciously over-the-top “Bitch Slap.”

Trixie, Hel and Camero may look good on the outside, but they’re nothing but badass on the inside.When the tempting trio arrives in the desert to retrieve stolen jewels at a ruthless gangster’s hideout, they find themselves competing against an assortment of bizarre criminals – and each other. But what else can one expect from a down-on-her luck stripper, a drug-running killer and a ball-busting businesswoman? Bounding with violence and excess galore, “Bitch Slap” is a wildly explosive tribute to the sensationalistic style of the cult exploitation genre and a modern throwback to the “B” movie film genre.

Also included on the disc is the Documentary ”Building A Better B-Movie”.