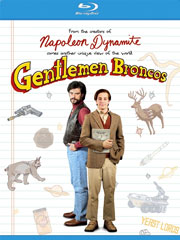 Mount your battle stag, grab a popcorn ball and get ready to laugh your head off at “Gentlemen Broncos!” The director of “Napoleon Dynamite” (Jared Hess) and co-star of “Flight Of The Conchords” (Jemaine Clement) team up to bring you the story of Benjamin Purvis (Michael Angarano), a lovable loner whose life is turned upside down when a pretentious fantasy author steals his story at a writers camp.

Unfortunately no details have yet been announced about the release but look for it on March 2 for $27.98 on DVD and $39.99 on Blu-Ray Disc.