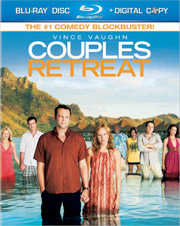 The comedy Couples Retreat has been slated for release in February from Universal Home Entertainment , bringing the film to DVD and Blu-Ray Disc.

Vince Vaughn leads an all-star cast in the laugh-out-loud comedy about eight friends whose vacation in paradise is one they’ll never forget. Their group-rate vacation comes at a price when they discover that participation in the resort’s unconventional couples therapy activities is anything but optional. Co-starring Jason Bateman, Jon Favreau, Faizon Love, Kristin Davis, Kristen Bell and Malin Akerman, Couples Retreat is a hilarious party in paradise, loaded with laughter and fun!

The DVD version arrives in widescreen with Dolby Digital 5.1 audio, as well as an Alternate Ending – Back in Chicago and a Gag Reel. Also included is Therapy’s Greatest Hits and Paradise Found: Filming in Bora Bora, as well as Behind the Yoga. A Commentary Track with Director Peter Billingsley and Star Vince Vaughn will also be included.

The Blu-Ray version will feature a 1080p high definition transfer with DTS 5.1 HD Master Audio and will also include the same bonus materials, as well as a Digital Copy and BD Live features.