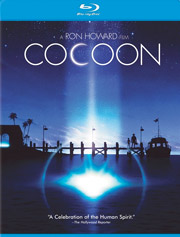 When visitors from a distant galaxy return to Earth on a secret mission, their other-worldly powers afford a group of senior citizens who have expected nothing more from life than bingo, shuffleboard, aches and pains, the chance to capture their youth. Inspiring and insightful, Cocoon is a magical story of love, friendship and the human spirit.

Featuring a 1080p high definition transfer with DTS 5.1 HD Master Audio language tracks, no bonus materials have yet been announced for the release.