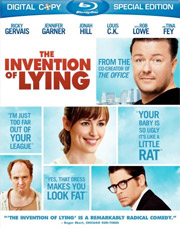 Warner Home Video is currently putting the final touches to the release of The Invention of Lying, bringing the funny film to DVD and Blu-Ray Disc in January.

In a world where people speak the truth and have no concept of deception, a young man about to lose everything invents the “lie” and goes on to change not just the nature of movie-making, but creates the basis of religion. After much effort, he also gets the girl he loves.

Starring the likes Ricky Gervais, Jennifer Garner, Jonah Hill, Louis C.K., Jeffrey Tambor, Fionnula Flanagan, Rob Lowe and Tina Fey, this film will arrive supported by a bunch of bonus materials, such as More Laughter: Corpsing and Outtakes as well as Prequel: The Dawn of Lying, Meet Karl Pilkington and A Truly “Honest” Making of Featurette with Ricky Gervais. Further you will find Ricky and Matt’s Video Podcasts on the release ,as well as Deleted Scenes and a Digital Copy.