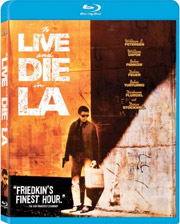 William L. Petersen (Manhunter, “CSI”) and Willem Dafoe (Spider-Man) face off in a deadly game of cat and mouse in this riveting action-thriller, To Live and Die in L.A. Full of flash, style and grit, this raw tale of corruption and revenge features one of the most harrowing car chases ever caught on film and a shockingly explosive ending. Federal Agent Richard Chance (Petersen) has a score to settle, and he’s through playing by the rules. Whether that means blackmailing a beautiful parolee, disobeying direct orders or hurtling the wrong way down a crowded freeway, he vows to take down a murderous counterfeiter (Dafoe) by any means necessary. But as the stakes grow higher, will Chance’s obsession with vengeance ultimately destroy him?

The release will arrive as a 2-disc Blu-Ray set with a 1080p high definition transfer of the film, complete with DTS 5.1 HD Master Audio on the first disc. The second disc will contain the DVD version of the movie, complete with a Commentary Track by director William Friedkin, Deleted Scenes and Alternate Endings, as well as a Making-Of Documentary called ”Counterfeit World” and a Photo Gallery.