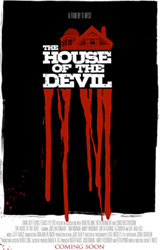 Dark Sky Films, a small independent film provider, has scheduled young director Ti West’s horror film The House Of The Devil for release on DVD and Blu-Ray Disc in February.

A creaky Victorian mansion, a graveyard, a lunar eclipse and a pretty college girl: all the elements of classic ‘80s horror are back – with a modern twist – in “The House Of The Devil”. Hot young writer-director Ti West (“The Roost,” “Cabin Fever 2”) sets his tale in the early 1980s and he creates an old-school atmosphere of dread and “satanic panic” that rivals the best of that classic era of shockers; the less-is-more approach has been embraced by new audiences.

The movie has a classic, deceptively simple set-up. Samantha (Jocelin Donahue), a pretty college sophomore, needs to come up with extra cash to pay the rent in her new apartment. She accepts a babysitting job from Mr. Ulman (Tom Noonan), a tall, creepy man who lives in a gloomy old house located next to a cemetery in the woods. Samantha soon learns that Ulman and his wife (Mary Woronov) don’t even have a child, but Ulman explains that he simply needs Samantha to keep an eye on his elderly mother-in-law while he and his wife go out to celebrate the lunar eclipse.

As the night goes on, old noises in the big house begin to unnerve Samantha. What is really going on with the unseen old woman secured away upstairs? What are the Ulmans really up to out in the woods in the dead of night? And what’s with that other weird Ulman family member, Victor (AJ Bowen), who’s lurking around the old house with mysterious intentions? The only thing that becomes clear to the increasingly terrified Samantha is that she may not make it to sunrise alive.