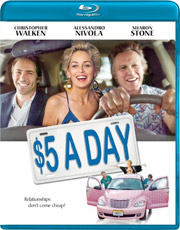 Image Entertainment is bringing the 2008 comedy $5 A Day to DVD and Blu-Ray Disc in January.

Christopher Walken is hilarious as Nat, an eccentric con-artist and deadbeat dad dying to reconnect with his troubled son, Flynn (Alessandro Nivola). Diagnosed with a terminal illness, Nat shanghais his reluctant son into driving him cross-country for experimental medical treatment. Low on cash, they pull off increasingly ridiculous and embarrassing schemes along the way to reach their destination spending only $5 a day. Boasting a star-packed cast that includes Sharon Stone, Amanda Peet and Dean Cain, “$5 A Day” is an irresistibly fresh and charming comedy about letting go of the past and choosing your own road.

The DVD version features an anamorphic widescreen transfer of the film with Dolby Digital 5.1 audio, while the Blu-Ray version arrives in a 1080p high definition transfer with a DTS 5.1 HD Master Audio track. Neither version will include extras.