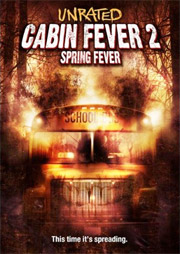 Lionsgate Home Entertainment has added Cabin Fever 2: Spring Fever to their release line-up, bringing the film to DVD in February, while also debuting the original Cabin Fever on Blu-Ray on the same day.

“Cabin Fever” delivered terror in the flesh but now your flesh will crawl with Cabin Fever 2: Spring Fever, the bloodcurdling sequel to the hit horror film.  Days after a killer virus consumed his friends; Paul emerges from a ditch by a river.  Though his body has been ravaged by the virus, he is determined to survive and to warn others of the danger.  However, a water bottling plant has already distributed contaminated water to the local high school.  The school’s students are excitedly preparing for the prom, unaware they’re about to have a grisly date with death.

The release will contain a number of bloody bonus materials, including a Commentary Track with actors Mark Borchardt and Giuseppe Andrews and a GagReel. Also included is a Special Effects Makeup Featurette when the release comes to stores on February 16 for $26.98 on DVD.

Eli Roth’s feature film directorial (and acting) debut, the new horror classic Cabin Fever, finally makes its Blu-ray Disc debut in a never-before-seen Unrated Director’s Cut.  As a last hurrah after college, friends Jeff, Karen, Paul, Marcy and Bert embark on a vacation deep into the mountains. With the top down and the music up, they drive to a remote cabin to enjoy their last days of decadence before entering the working world.  Then somebody gets sick.  Karen’s skin starts to bubble and burn as something grows inside her, tunneling beneath her flesh.  As they debate about how to save her, they look at one another and realize that any one of them could also have it.  What began as a struggle against the disease soon turns into a battle against friends, as the fear of contagion drives them to turn on each other.

This release will feature a 1080p transfer of the film with a DTS 7.1 HD MAster audio track to boot. Also included are a number of bonus materials including a new Commentary Track with the director and cast members, the Featurette “Beneath The Skin: The Making of Cabin Fever” and more.

The “Cabin Fever” Blu-Ray Disc crawls onto store shelves on February 16 also for only $19.99.

Now, am I the only one wondering why “Cabin Fever 2” is not making it to high definition?