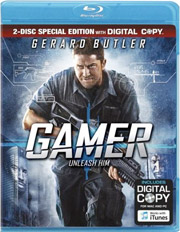 Lionsgate Home Entertainment is bringing Gamer to DVD and Blu-Ray Disc in January.

In the future, humans control other humans in mass-scale, multi-player online games:  people playing people…for keeps.  Mind-control technology is widespread, and at the heart of the controversial games is its creator, reclusive billionaire Ken Castle (Michael C. Hall).  His latest brainchild, the first-person shooter game “Slayers,” allows millions to act out their most savage fantasies online in front of a global audience, using real prisoners as avatars with whom they fight to the death.  Kable (Gerard Butler) is the superstar and cult hero of the ultraviolent “Slayers.”   Taken from his family, imprisoned and forced to fight against his will, the modern day gladiator must survive long enough to escape the game to free his family, regain his identity and to save mankind from Castle’s ruthless technology.

The release will contain a Commentary Track with the filmmakers and cast members, as well as a Making Of Documentary and a Featurette looking at the groundbreaking camera work completed on the film. The Blu-Ray version also includes Lionsgate’s I-Con Mode with expanded visual commentary, interactive scene-specific crew commentaries accessible throughout the film. The release is rounded out by a never-before seen theatrical trailer that was deemed too radical for audiences.