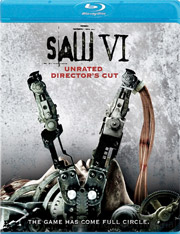 Lionsgate Home Entertainment has just added the next bone chilling installment of their successful horror film franchise to their line-up, making Saw VI available on DVD and Blu-Ray in January.

In the sixth installment, Special Agent Strahm is dead, and Detective Hoffman has emerged as the unchallenged successor to Jigsaw’s legacy.   However, when the FBI draws closer to Hoffman, he is forced to set a game into motion, and Jigsaw’s grand scheme is finally understood.

The film will be available in three different versions – an R-rated Theatrical Full Screen Edition, an Unrated Director’s Cut Widescreen Edition and an Unrated Director’s Cut Blu-ray Disc – and also as a digital download.  All three versions are a “2-Movie Set” that includes the first original SAW feature film so viewers can see “where it all began.”  All three versions also contain fabulously frightening bonus materials including three Featurettes that take a look at Jigsaw, the traps and an exclusive look at the Halloween Horror Nights Saw Maze, plus Music Videos.  In addition, the unrated DVD and Blu-ray Disc feature two separate Audio Commentaries with the executive producers and the screenwriters of the film.