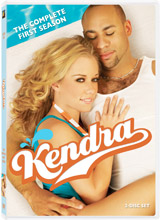 20th Century Fox Home Entertainment is bringing the first season of Kendra to DVD in January, giving fans of the former playmate a chance to see some more of the blonde.

Kendra Wilkinson has left the Mansion! “The Girls Next Door” star has a new life and a new baby due Christmas Day. Also arriving at the holidays is the first season of her all-new reality series. See what’s in store for Hugh Hefner’s former girlfriend as she builds a career, plans her wedding and makes a new life for herself and husband, NFL wide receiver Hank Baskett.

The DVD set will also include the Bonus Episode: Keepin’ It Real as well as a Blooper Reel as an Easter Egg. The release is rounded out by Season and Episode Teasers.