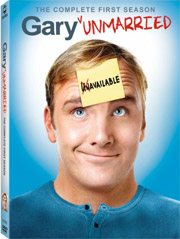 Everything seems unfamiliar for suddenly single dad Gary Brooks (Jay Mohr) as he tries to navigate his increasingly complex life. A painting contractor, Gary is doing the best he can to share the upbringing of his 14-year-old son Tom (Ryan Malgarini) and 11-year-old daughter Louise (Kathryn Newton) with ex-wife Allison (Paula Marshall). Just as he’s trying to figure the etiquette involved in informing his ex of his gorgeous new girlfriend Vanessa (Jaime King), Allison drops a major bombshell on him—she’s engaged to their marriage counselor! Kids, romance and his ex-wife’s controlling ways keep Gary guessing as he gets used to his strange and uproarious new world.

The 3-disc DVD set will feature an anamorphic widescreen transfer of the TV show, complete with Dolby Digital 5.1 audio. As extras you will find Bloopers on the release, as well as The Chemistry Of Comedy, a featurette in which the cast and crew gives you an all-access tour of “Gary Unmarried.” Also included is Planet Begley, in which cast member Ed Begley, Jr. brings his eco-friendly expertise to the set of “Gary
Unmarried”, and Tuesday On The Set With Jay, in which you get to spend a day on the set of “Gary Unmarried” with Jay Mohr.

“Gary Unmarried: The Complete First Season” arrives on February 9 for $39.99.