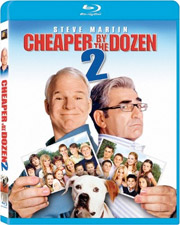 20th Century Fox Home Entertainment has added the Steve Martin comedy Cheaper By The Dozen 2 for release on Blu-Ray Disc in January.

Tom Baker (Steve Martin) and wife Kate (Bonnie Hunt) bring their clan together for a memorable summer getaway. But their dream vacation turns into an outrageous competition with the overachieving, overzealous family of Tom’s long-time rivals, Jimmy Murtaugh (Eugene Levy) and wife Sarina (Carmen Electra).  Featuring all the original Baker kids, including Hilary Duff, Tom Welling and Piper Perabo, this super-sized comedy is fun for the whole family!

The Blu-Ray version will offer a 1080p high definition transfer of the move, complemented by aDTS 5.1 HD Master Audio track. In addition, you will find a Commentary Track with director Adam Shankman on the disc, as well as the Featurettes “Camp Chaos” and “A Comedic Trio”, as well as a Casting Session presented by Fox Movie Channel.

The release will carry a suggested retail price of $29.99 when it arrives in stores on January 5.