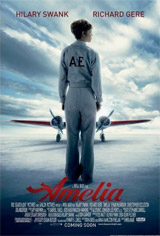 Two-time Academy Award Winner Hilary Swank delivers an unforgettable performance as Amelia Earhart, the legendary American aviatrix who boldly flew into the annals of history. Richard Gere co-stars as her charismatic business partner and adoring husband George Putnam. Bound by ambition and love, their enduring marriage could not be broken by Amelia’s determination to fly – nor her passionate affair with Gene Vidal (Ewan McGregor). Equal parts gripping drama, stirring romance and epic adventure, Amelia will take your breath away and send your spirit soaring!

At this time no exact details and specs have been unveiled, considering that this is a high profile title for the studio, expect to see a number of extras on both versions of the release.