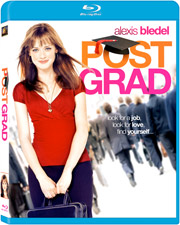 When her carefully constructed life begins to unravel, an aspiring book editor wonders if she’ll ever live up to her own high expectations. Ryden Malby (Alexis Bledel) has a master plan. Graduate college, get a great job, hang out with her best friend (Zach Gilford) and find the perfect guy. But her plan spins hilariously out of control when she’s forced to move back home with her eccentric family. By the time she lands her dream job, Ryden realizes it’s meaningless without the man of her dreams…and the people she loves. Michael Keaton, Carol Burnett and Jane Lynch co-star in this offbeat romantic comedy from producer Ivan Reitman that proves you can still end up on top, even when your life is turned upside-down!

Include on the release are Deleted and Alternate Scenes as well as Real Life Advice with Alexis Bledel and Zach Gilford. There will be a series of Featurettes on the disc, including ”Know Your Strengths: Career Advice,” “How Not To Get A Job,” “A Guide To Moving Back Home,” “Dress For Success,” “Find Your Match! The Best Job For You,” “What Not To Wear” and ”Post Grad Confidential”. The release will be rounded out by the “One Day” Music Video By Zach Gilford.