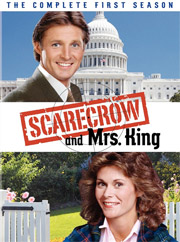 Warner Home Video has added the 80s TV series Scarecrow and Mrs. King: The Complete First Season to their release line-up, bringing the first season to DVD in March.

Starring Kate Jackson and Bruce Boxleitner, it is “Goodbye, PTA…hello, foreign intrigue!” Single mom Amanda King leads a quiet suburban life in Washington DC until the day a dashing stranger shoves a package in her hands with instructions to give it to the man in the red hat. In no time, Amanda is dodging bullets, foiling assassination plots – and finding herself drawn to the dashing stranger, agent Lee Stetson, aka Scarecrow. Of course, Scarecrow has no interest in a ditsy amateur spy, no matter how pretty. But she certainly is handy in a crisis!

Arriving as a 5-disc DVD set, the release will feature all 21 episodes from the lighthearted show’s first season that proves laughs and romance are powerful weapons in the battle to protect national security. As with most TV series, no bonus materials will be included.

“Scarecrow and Mrs. King: The Complete First Season” makes its DVD debut on March 9 for $39.98.