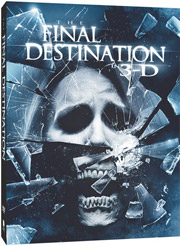 New Line Home Entertainment and Warner Home Video have added DVD and Blu-Ray versions of the latest entry in the franchise to their line-up by scheduling The Final Destination for a January release.

The movie series that taps into your deepest fears returns with a new and imaginative chapter that delivers the expected – in so many keep-you-guessing, unexpected ways! A strange premonition causes friends to abandon their day at the speedway, just before a crushing pileup hurtles cars into the bleachers with fiery consequences. They have cheated Death. But Death is only getting started.

The DVD version features a widescreen presentation of the movie with Dolby Digital 5.1 audio. As extras you will find Body Count on the disc, a feature that gives you direct access to the deaths of this fourth installment of “Final Destination.” Also included are Deleted Scenes and Pre Visualization Sequences and Storyboards.

The Blu-Ray version arrives featuring a 1080p high definition transfer with high definition audio. It will include the bonus features from the DVD version but will also contain a BD Live My Commentary feature in which viewers can create their own commentary track for the film, and a Live Community Screening. The release is rounded out by a Digital Copy of the film.