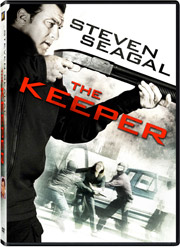 20th Century Fox Home Entertainment has added a DVD version of Steven Seagal’s actioner The Keeper to their January schedule.

Steven Seagal unleashes his wrath – and his fists – in this fast-paced thriller about an ex-cop caught in a web of deceit, racism and murder. Chock full of high-octane stunts and eye-popping action, “The Keeper” is a nonstop adrenaline rush. Double-crossed by his rogue partner and forced to retire, Los Angeles street cop Rolland Sallinger (Seagal) accepts a gig guarding the beautiful daughter of a wealthy businessman. But when mobsters kidnap the girl, Rolland’s job turns from protector to hunter as he untangles a dangerous web of lies and murder. Now, in a race against time, Rolland must use his wits, weapons and brute force to get her back – before it’s too late.

The release will feature an anamorphic widescreen transfer of the film with Dolby Digital 5.1 audio. No bonus materials have been announced at this time.