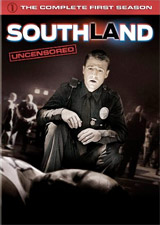 Warner Home Video has just added a DVD version of Southland: The Complete First Season to their line-up, scheduling the release for late January.

Created by John Wells (ER, The West Wing, Third Watch), Christopher Chulack (ER, Third Watch) and Ann Biderman (Public Enemies, Hill Street Blues), “Southland: The Complete First Season” follows the complicated lives dedicated LAPD officers and detectives lead as they take on criminals, victims and a city tainted by vice and seething with danger. The rookie cop and his savvier, veteran colleagues try to make a difference in the not so glamorous part of Hollywood, but as one wised-up cop says, “Every once in a while, you get to take a bad guy off the street for good. And that, my friend, is God’s work.”

The 2-disc DVD set will include seven uncensored episodes from the show, presented in anamorphic widescreen with Dolby Digital 5.1 audio. No extras have been announced.

“Southland: The Complete First Season” arrives in stores around the country on January 26 for $29.98.