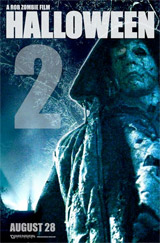 “Halloween 2” picks up at the exact moment that 2007’s box-office smash, “Halloween” stopped and follows the aftermath of Michael Myers’s (Tyler Mane) murderous rampage through the eyes of heroine Laurie Strode (Scout Taylor Compton). Evil has a new destiny. Michael Myers is back in this terrifying sequel to Rob Zombie’s visionary re-imagining of Halloween which grossed almost $80 million worldwide. It is that time of year again, and Michael Myers has returned home to sleepy Haddonfield, Illinois to take care of some unfinished family business. Unleashing a trail of terror that only horror master Zombie can, Myers will stop at nothing to bring closure to the secrets of his twisted past. But the town’s got an unlikely new hero, if they can only stay alive long enough to stop the unstoppable.

The film will arrive as an R-Rated and an Unrated DVD version, sold separately, presenting the film in anamorphic widescreen with Dolby Digital 5.1 audio. The Unrated version will contain a Commentary Track with Writer/Director Rob Zombie, a selection of Deleted and Alternate Scenes and a Blooper Reel.. Also included is Audition Footage and the Featurettes ”Michael – Interior” and ”Uncle Seymour Coffins’ Stand-Up Routines”. The disc will be completed by the Captain Clegg and the Night Creatures Music Videos.

The Rated DVD version will contain the same extras with the exception of the commentary track.

The Blu-Ray version will feature a 1080p high definition transfer with DTS 5.1 HD Master Audio and will include all of the same bonus materials – though presented in high definition here. In addition, this version will contain Sony’s movieIQ feature offering up trivia information as you watch the film.

Considering that Rob Zombie’s remaking of Jon Carpenter’s original horror classic turned out much better than expected, fans a undoubtedly eager to get their hands on “Halloween 2” when it arrives on January 12 for $28.96 on DVD and $38.96 on Blu-Ray Disc.