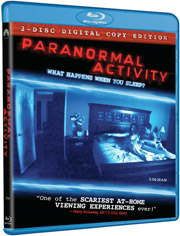 Paramount Home Entertainment has added the shaky-cam fright fest Paranormal Activity to their release line-up, scheduling the film for release on DVD and Blu-Ray Disc in DEcember.

You demanded it and now the surprise hit critics call “one of the scariest movies of all time”* can be experienced in the most terrifying place of all…your home. After a young, middle-class couple moves into what seems like a typical suburban house, they become increasingly disturbed by a presence that may or may not be demonic but is certainly most active in the middle of the night. Especially while they sleep.
The “PARANORMAL ACTIVITY” DVD version is presented in widescreen enhanced for 16:9 televisions with Dolby Digital English 5.1 Surround and Spanish 5.1 Surround. The disc will feature the movie’s Theatrical Cut as well as an Unrated Version with alternate ending not seen in theaters.

The Blu-Ray version features a 1080p high definition transfer with an English DTS 5.1 HD Master Audio track. It will also feature two versions of the film, as well as a Digital Copy of the theatrical version. No other extras will be included on either release.