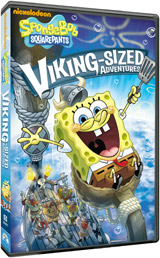 Join SpongeBob and his pals as they go on a Viking-Sized Adventure, weather a storm, fill in for super heroes Mermaidman and Barnacleboy and meet Mr. Krabs grandpappy the pirate, guest starring Dennis Quaid and Ian McShane!