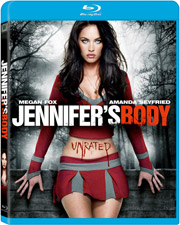 In every school there’s one girl, every girl wants to be friends with…and every guy would die for. Sexy temptress Megan Fox (Transformers) is hotter than hell as Jennifer, a gorgeous, seductive cheerleader who takes evil to a whole new level after she’s possessed by a sinister demon. Steamy action and gore galore ensue as the male student body succumbs to Jennifer’s insatiable appetite for human flesh. Now it’s up to her best friend (Amanda Seyfried) to stop the demonic diva’s reign of terror before it’s too late!

The Blu-Ray version will arrive as a 2-disc set, featuring both cuts of the film also, including the Commentary Tracks from the DVD version. In addition, you will find Six Deleted Scenes on the disc, as well as a Gag Reel. The Featurette ”Jennifer’s Body: The Dead Pool” is also included as well as Four Video Diaries. Look for the Featurettes ”Megan Fox Is HOT,” “Megan Fox “Peer Pressure” PSA” and Fox Movie Channel Presents ‘Life After Film School’ with Writer Diablo Cody on the disc also. The release will feature a Digital Copy of the movie on the second disc.