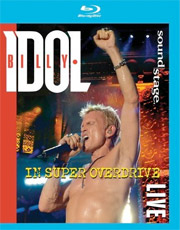 With his raspy baritone, bleached spiked hair, and rebellious charisma, Billy Idol established himself as a unique face in punk rock and Rock ‘N’ Roll, and continues to shine as a one-of-a-kind artist. Eagle Rock Entertainment will bring In Super Overdrive to DVD and Blu-Ray Disc next week!

Filmed at the Congress Theater in Chicago, “In Super Overdrive Live” was taped for the television series “Soundstage.” Originally broadcast in America in July 2009, this show finds Idol reunited with guitarist Steve Stevens, and backed by bassist Stephen McGrath, keyboardist Derek Sherinian, and drummer Brian Tichy.

A proprietor of pop-rock perfection, Billy Idol rouses the crowd through 12 blazing tracks. This 70-minute DVD features hits like “Dancing With Myself, “Flesh For Fantasy,” “Rebel Yell,” and “White Wedding,” in addition to Generation X favorites and newer material from his latest CD The Devil’s Playground. Also included are two previously unreleased tracks, “Touch My Love” and “Cry.” A killer performance, “In Super Overdrive Live” is a fantastic display of the raw power Billy Idol exudes.