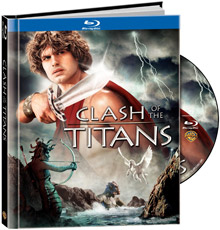 Warner Home Video has announced two ’80s classics are coming to Blu-ray in March; Clash of the Titans and The Neverending Story.

When young Bastian borrows a mysterious, ornately-bound book in The Neverending Story, he never dreamed turning a page would draw him into a shimmering fantasy world of racing snails, hang-glider bats, soaring luckdragons, puckish elves, a Childlike Empress, the brave warrior Atreyu and a slab-faced walking quarry called a Rock Biter.

The film features a 1080p high definition transfer with high def audio and will also include the film’s Theatrical Trailer.

Before history and beyond imagination! The machinations of gods above and the fates of man and monsters here below play out in a Clash of the Titans. Decades prior to the sensational 2010 version of the tale, Harry Hamlin took up sword and shield to play valorous Perseus, mortal son of Zeus (Laurence Olivier) who sets out to fulfill his destiny by rescuing beloved Andromeda from the wrath of goddess Thetis (Maggie Smith). Perils await Perseus time and again. And eye-filling thrills await viewers as stop-motion effects legend Ray Harryhausen (Jason and the Argonauts) unleashes snake-haired Medusa, fearsome Kraken, winged Pegasus, two-headed dog Dioskilos, giant scorpions and more. Rejoice, fantasy fans: the movie gods gift us with adventure that’s innovative, heroic, titanic.

Arriving in a 1080p high definition transfer with high definition audio, the release will also include a Conversation with Ray Harryhausen, Maps of Myths and Monsters and Trailers for the original and the 2010 remake of the film.

Both titles arrive on March 2nd, though, the price has yet to be determined.