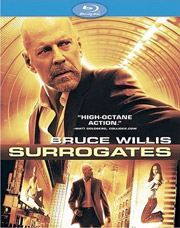 Buena Vista Home Entertainment has announced the final details for the upcoming release of Surrogates on DVD and Blu-Ray Disc, scheduled for release in January.

FBI agent Tom Greer (Bruce Willis) lives in a world where robotic surrogates stand in for people, protecting them from violence, contagion—and the appearance of aging. These picture perfect, real-life avatars—fit, good-looking, remotely controlled machines that assume their operator’s life role—enable the population to experience life vicariously from the comfort and safety of their own homes. Greer and his partner, Agent Peters (Radha Mitchell), are called in to probe the mysterious death of a college student, whose life ended when his surrogate was destroyed. When Greer’s surrogate is damaged in the investigation, he ventures out of his apartment for the first time in decades. In a world of masks, Greer must decide who is real and who can be trusted.

The DVD version will feature a widescreen version of the film with Dolby Digital 5.1 audio. As extras the disc will also contain a Commentary Track by director Jonathan Mostow and the “I Will Not Bow” Music Video by Breaking Benjamin.

The Blu-Ray version will feature a 1080p high definition transfer with DTS 5.1 HD Master Audio. On this release you will find the same Commentary Track ad Music Video, as well as the Featurette A More Perfect You: The Science of Surrogates that takes a look at mind-controlled robotics as it is already in use in today. This featurette explores the realities of this technology and offers an in-depth look into the creation of the superhuman versions of the cast created for this film. Also included is the Featurette Breaking the Frame: A Graphic Novel Comes to Life, a visual exploration of the evolution of “Surrogates” from graphic novel to major motion picture from the earliest designs and sketches. Pivotal sequences come to life in a dazzling 3-D animated experience. Further, the Blu-Ray Disc will contain Four Deleted Scenes .