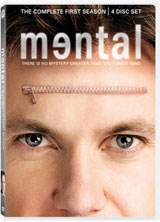 20th Century Fox Home Entertainment has just included Mental: Season One to its winter line-up, bringing the TV show to DVD for the first time in December.

As the new Director of Psychiatric Services at Wharton Memorial Hospital, Dr. Jack Gallagher (Chris Vance) has a lot to cope with. Gallagher uses his unique talent to probe the intriguing psyches of his troubled patients, but his unorthodox methods place him at odds with his quirky colleagues, including his new boss (Annabella Sciorra), who just happens to be his ex-lover. Meanwhile, Gallagher must search for the missing pieces of his own troubled past.

You have a doctor’s appointment on December 1 when “Mental” comes to a store near you for $49.98.