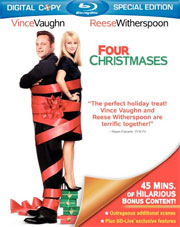 Warner Home Video has added the comedy Four Christmases starring Vince Vaughn and Reese Witherspoon to their release line-up, bringing the film to DVD and Blu-Ray Disc in late november.

Every Christmas happily unmarried Brad and Kate escape divorced parents and exasperating relatives by getting on a plane. This year a fog rolls in, the airport shuts down and the couple is forced to celebrate four family Christmases in one hectic, hilarious day. Vince Vaughn and Reese Witherspoon lead an all-star cast in a comedy brimming with good cheer and great laughs — as well as the answer to the question: Can Brad and Kate’s relationship survive Four Christmases?

The DVD version will feature an anamorphic widescreen transfer of the film with Dolby Digital 5.1 audio, but will not contain any extras.

The Blu-Ray version on the other hand offers a 1080p high definition transfer with a selection of Seven Deleted Scenes and a Gag Reel, as well as the Featurettes ”Behind The Story,” “Four Christmases: Holiday Moments” and “Seven Layer Holiday Meals In a Flash”. Also included is the HBO First Look ”Four Christmases: Behind The Madness”.

Further you will find a BD Live Media Center on the release as well as Four Christmases: Favorite Christmas Memories and Paula Deen and Katy Mixon Unleashed, a series of funny Outtakes.