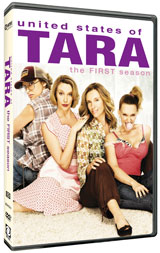 Tara Gregson is a wife and mother with dissociative identity disorder (DID). After deciding to take a break from her medication to discover the real cause of her disorder, her alternate personalties re-emerge: wild and flirty teenager T; old-fashioned housewife Alice; and male, loud, beer-drinking Vietnam vet Buck. Tara is supported by her calm and level-headed husband Max, her somewhat troubled teenage daughter Kate and quirky, good-hearted gay son Marshall. Her sister, Charmaine, is not so supportive, often expressing her doubt about the validity of Tara’s disorder.

This Showtime TV series will arrive as a 2-disc DVD set that also includes a Commentary Track with Diablo Cody and Jill Soloway. Further you will find the Interview Featurette ”Sitting Down with Diablo Cody” on the release, as well as the Featuette ”Meet Toni Collette” and the first episode of “The Tudors Season 3.”