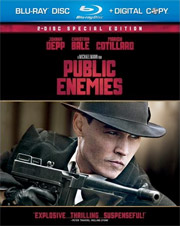 “Public Enemies” is Mann’s take on the legend of the notorious 1930s bank robber and gangster John Dillinger, giving the character and setting the attention to detail that is inherent in Mann’s work.

The DVD version will feature an anamorphic widescreen transfer of the film with Dolby Digital 5.1 audio and a series of extras, such as a Commentary Track by Michael Mann and a Featurette entitled ”Larger Than Life: Adversaries”. A second, Special Edition, DVD version will be available, offering also a Digital Copy of the film and five more Featurettes, including ”On Dilliger’s Trail: The Real Locations”.

The Blu-Ray version will present the film in 1080p high definition with DTS 5.1 HD Master Audio and will include the same extras as the Special Edition DVD. Although not announced yet, the release will most likely include additional features exclusive to the high definition version, including BD Live content.